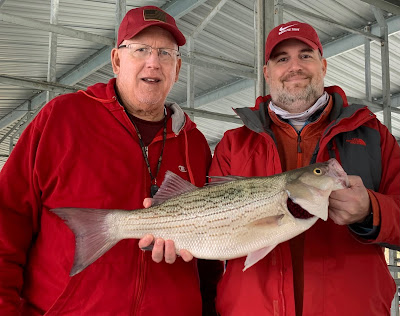 Norfork Lake fishing really has not changed a lot since my last report two weeks ago. The lake temperature has dropped a little and the thermocline has dropped to basically the edges of the old river channel. The deep water will eventually become totally oxygenated and the water temp will be consistent from surface to the bottom. I have mainly been fishing on the various flats in the mid to northern parts of the lake. Heading west of my resort, Hummingbird Hideaway Resort, the flats are near Mallard Point, Cranfield Island, Cranfield Campground, Seward Point, Briar Creek and then up around the Red Bank area. Heading east of our resort are the 101 Bridge Flat, Big Sandy which is a little past 101 Boat 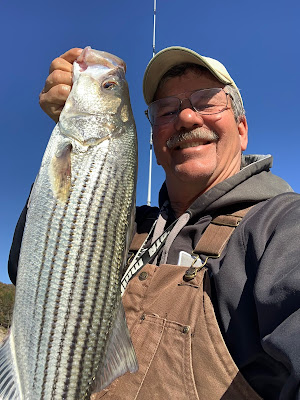 Dock and the Cow Pasture, which is the area right before the 6B marker. (A few of the names have been given by local fishermen.) Striped and hybrid bass, white bass, largemouth and spotted bass, catfish and walleye can all be found on these flats at some point during the day and sometimes multiple times during the day. The bait moves onto the flat and the predators move in to feed. The best fishing depth seems to vary based on the time of day. But it seems that 30 – 40 feet of water has been the most productive depths during daylight hours. As the lake water cools the bait and fish will continue to move a little deeper. In the dark, the fish seem to move up shallower following the bait. My bait of choice for flat fishing has been to vertical jig a ½ to a 1-ounce spoon. The fish are currently feeding on 1 ½ inch to 2-inch thread fin shad. This does not mean they won’t attack a bigger bait and at times they may prefer a little heartier meal. I have also been casting out a 5-inch swimbait, as well as, my ½ ounce Kastmaster. Other styles of blade baits, such as a cicada, are working very well. Trollers are also picking up some nice striped bass by trolling umbrella or Alabama rigs. Other areas where these species are showing up or will very soon, are back in the major creeks, such as; Big, Brushy, Float, Panther and Fall Creeks, as well as Bennett’s Bayou and up river around the state line.

I can not personally talk about crappie fishing as I have been spending the majority of my time locating and catching the species talked about above. From what I have been told by the crappie guides is that the bite has been good. The bigger slabs are starting to move into the brush and small jigs and minnows are working very well. I will take some time off from my striped bass fishing and check out the crappie bite myself before long.

Norfork Lake surface water temperature this morning was in the mid 60-degree range. The lake has become fairly stable with just slight variations either up or down and currently sits at 553.62 feet MSL. The lake is slightly stained from the mid-lake area and heading north, but there has been a slight clearing starting to 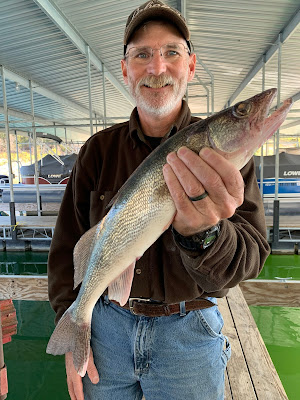 happen. The lake continues its slow progression to a total lake turnover. I am starting to mark bait and a few fish 75 – 80 feet deep which tells me the good cool oxygenated water is continuing to fall lower and lower until eventually it will reach all depths and the lake will be totally turned over. This year the turnover process has been virtually unnoticeable. 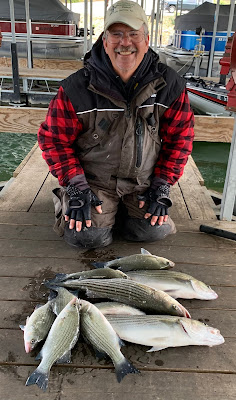