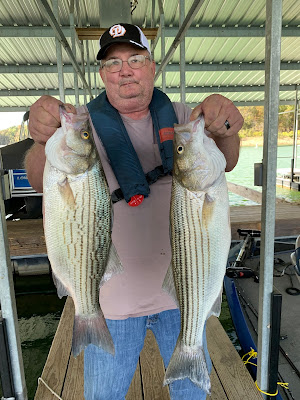 Norfork Lake fishing has been pretty good for me over the last week. Striped bass is the one species that was slow to bite during September and the first part of October, but the bite has now improved dramatically. A slower bite for stripers in the latter part of summer is not uncommon, since warm water is not what the stripers want, so they just go deep to the cool water and wait for their preferred water temperature of 60 – 70 degrees. We are to that point and they are starting to become aggressive. There is a good after dark bite for striped/hybrid bass and the morning bite is starting to take off. Various Norfork Lake flats have been the areas where fish are being found. The best depth for the after dark bite has been anywhere from 25 to 33 feet of water. Trolling crank baits that dive roughly 16 feet has been productive for a couple of our guests. Last weekend, several other guests found nice fish feeding early in the morning on a large flat. The fish were in roughly 32 feet of water and vertical jigging a spoon worked best. I have been graphing various flats and have found feeding stripers each morning since last weekend. The fish have been in 30 to 35 feet of water cruising around at all depths.  Some fish are suspended 15 feet down to the bottom. I have noticed that the larger fish seem to be suspended up in the water column and the smaller ones are laying on the 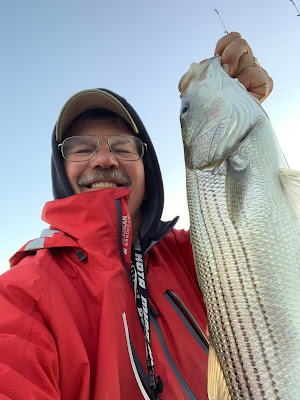 bottom. In the same areas you will also find large schools of white bass. Most are on the bottom feeding, but some may be suspended. The news even gets better, feeding along side of the striped/hybrid and white bass are many channel and flathead catfish lying on the bottom. It will not be long until walleye move into the same area. Vertical jigging a 1-ounce spoon has been my best method to catch all of the above species. In order to catch these fish, I have had to experiment with presentation methods. I have caught fish casting the spoon out and letting it drop to the bottom. I then retrieve the spoon in a jerking motion, usually trying to keep the bait close to the bottom. Vertical jigging has been productive, but on a few occasions, I had to move slowly with the trolling motor and let out more line until the spoon hits the bottom. I then give it a hard forward jerk and then let it settle back to the bottom. Sometimes the fish hammer the bait as I am jerking it and a few times they have picked the spoon up on the fall and the line goes slack. You’ll need to reel the slack up very fast until you feel the fish and set the hook. 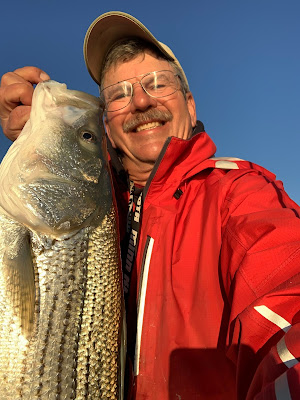 Norfork Lake surface water temperature this morning was close to 70 degrees. The lake has become fairly stable with just slight variations either up or down and currently sits at 553.26 feet MSL. The lake is slightly stained from the mid-lake area and heading north. The lake continues its slow progression to a total lake turnover. I am starting to mark lots of bait a little below 60 feet telling me the good cool oxygenated water is continuing to fall lower and lower until eventually it will reach all depths and the lake will be totally turned over. Some years it is an obvious abrupt turnover, but typically it is a slow unnoticeable process. 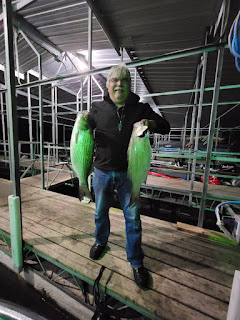 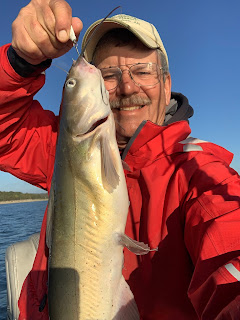 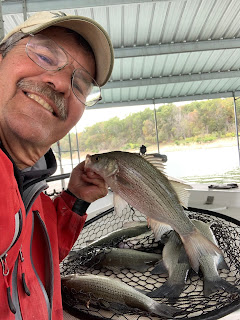