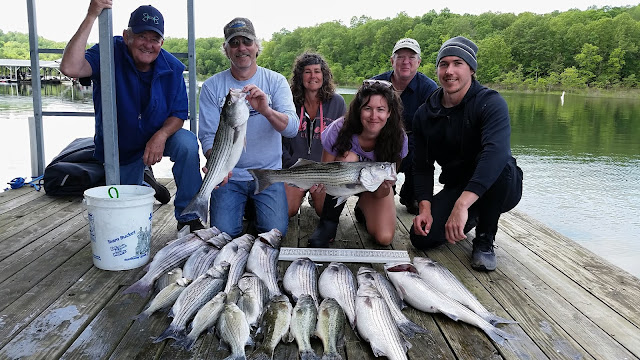 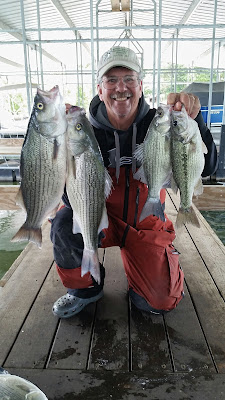 Norfork Lake fishing continues to be good even with constant weather pattern changes. Yes, our lake has risen roughly 11 feet since my last report, 2 weeks ago, but things are becoming much more stable. All species are biting, but the patterns have changed with all the new space the fish have to play in and all the new brush that has gone under water. High water is a blessing to the fish population, especially when it happens after most of the species have spawned. We will see the effect of this year's higher water in about 3 years with increased fish population, as well as, increases in size.

The striped bass and hybrid bass bite has been steadily improving. They are being caught throughout the lake. The best locations at this time are partway, to most of the way, back into major creeks. But I am starting to see a few of this species finally starting to move out to main lake points which is typically the norm for this time of year. This morning I found a huge school of hybrids near a main lake point feeding on shad. I ended up landing four in the 7 to 8 pound range, on a 6 inch paddle tail swimbait in a sexy shad color. As soon as it started to get light out the bait and fish moved on. Hummingbird Hideaway Resort had almost a full house of guests with us last week and the majority of them were striped bass fishermen and 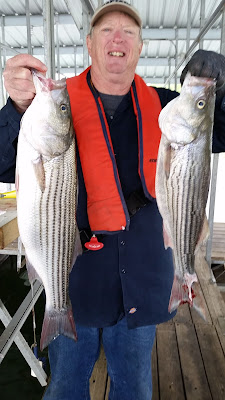 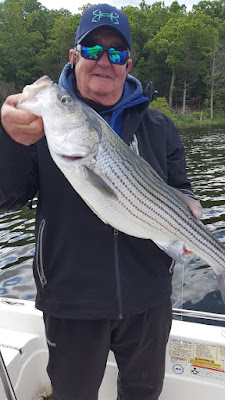 women. Over the week I think they fished the entire lake and had great success on most days. The best bait for them was live shad or shiners. Free lining the bait with no weight caught fish as did setting down lines at 20 and 30 feet deep. Most of the fish they found were back in major creeks in 30 - 45 feet of water. Some of the fish were close to shore on the deep side, but others were out in the middle. Vertical jigging with a spoon has also been producing some nice fish back in the same areas in 30 - 35 feet of water on the bottom. 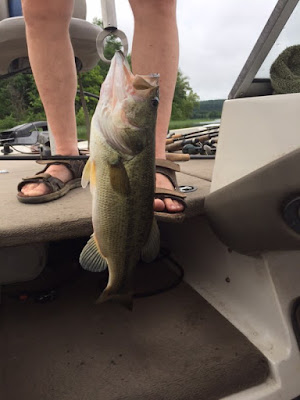 The bass bite has also been very good. The best location for this species is inside of the sunken brush. Some of the most productive areas has been long points that have been totally submerged, with some of the brush just slightly above the water line. The fish will be hanging near the brush, to just outside of the brush. Use worms, lizards, centipedes, or just about any plastic bait, worked slowly along the bottom. There are occasions that you will only see your line moving off to one side, if you notice the movement set the hook. Spinner baits is also working ripping it back through the brush. The fun part with fishing inside of the brush is getting the fish out. :-) Topwater action has slowed for now, but will pick up again soon. Even if you don't notice the fish hitting the surface, throw a topwater bait into the brush and you will be able to call up some nice fish. Once the water temperature reaches 70 + degrees we will start seeing the bass exploding. 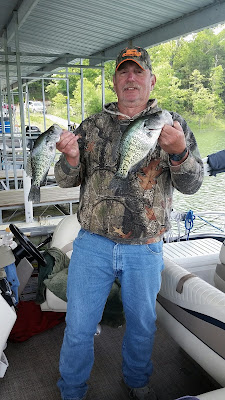 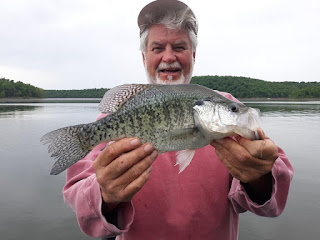 Blue gills have started to spawn in the backs of creeks and coves in very shallow water. Small jigs are picking up some nice fish. The crappie bite has changed over the last couple of weeks. Most have spawned out and have moved out to their 30 feet deep brush. The water level rose and has somewhat scattered the fish. Some are being caught at the edges of the sunken brush in 18 to 25 feet of water. Trolling small crank baits are still working, but using small jigs once you find the fish is also picking up a few nice ones. 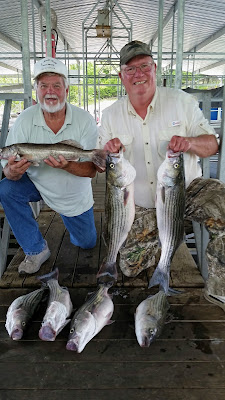 Walleye are showing up with the stripers, hybrids and whites chasing the bait fish. You will pick up some nice fish with live bait or by casting a swimbait, an A-rig or suspending jerk bait to the shoreline. The best time to catch this species is sunrise and sunset. 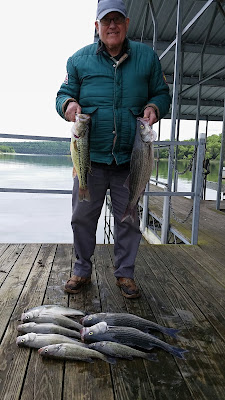 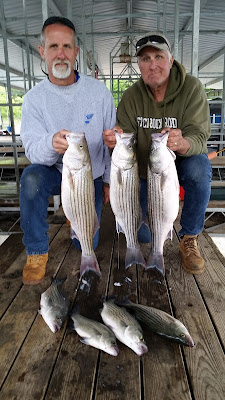