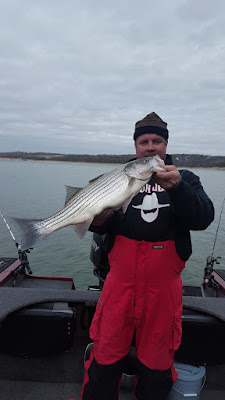 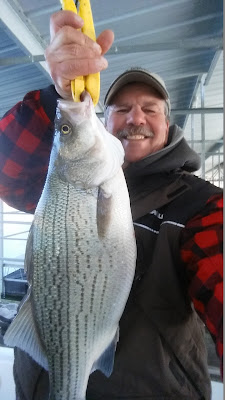 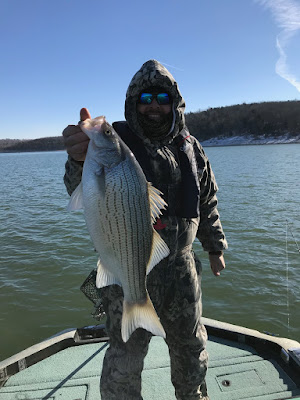 January has brought our normal significant weather pattern changes. About 12 days ago we went from the 50's to single digits for about 6 days and even had several inches of snow. Over the last several days we were back in the mid 60's but here we go again with a slight cool down. All of these changes in the weather affect what the bait and fish do. On the 10th of January large schools of fish were feeding in about 60 feet of water, but after the cold snap the hybrids and stripers disappeared, even though the bait was still hanging around. Normal winter time striped bass fishing would have the fish out in the deep water channels feeding on suspended bait in 40 - 60 feet down. The bait is there, but only scattered fish are showing up. With the cold weather and snow, the water temperature dropped about 3 - 4 degrees, but over the last several days the surface water temperature has risen 2 to 3 degrees. All of the changes confuse the fish as well as the fishermen, including me.

We had several fisherman staying with us over the weekend all fishing for stripers, a few were caught, but it was tough going. The areas where I found fish were in the Henderson area close to the bluffs. Big balls of shad were being pushed into the bluffs by the west wind and there were a few stripers hanging around 30 feet down. Both spoons and live shiners caught fish. Yesterday, I was out fishing from the 62 bridge area all the way down to Fouts Marina and only marked a few lone fish. I did more looking than fishing. I heard from a friend that he found  stripers in very shallow water a few days ago, so I guess I am going to need to think outside the box and look at areas that I would typically avoid this time of year. The last two days the wind was howling so I elected to stay at the resort today instead of fish. I will be back at it in the morning and start the hunt again. 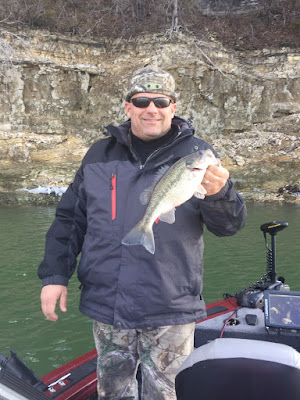 I ended my fishing excursion yesterday by doing a little bass fishing. I headed into a cove that the wind was blowing very strongly into. I stopped on a secondary point and found large balls of shad next to the the shore and a few shad  floating on the surface. I tied on a Rogue (a shallow running suspending jerk bait) and started casting to the shore. I gave the bait a couple of hard jerks to get it down, then let it rest for a few seconds, then start twitching the bait softly, then stopped. I did this back to the boat. On the second cast the bass started to get active and I landed 3 largemouth bass in a very short period of time. No monsters, but fun. The wind was blowing so hard that the waves were starting to splash over the boat so I called it a day. The other location where my guests were finding bass was along deep bluff lines. The fish were about 30 feet deep. Live bait was catching these suspended largemouth and spotted bass.

A few small shad are starting to die from the cold water, which is very normal for this time of year. If you can find a school of shad that are distressed, on the surface and close to the shoreline, there will more than likely be bass in the area feeding away. I started to see a little of this yesterday, but I really could not tell if the shad were distressed or just being blown into shore from the strong wind.

Norfork Lake is currently stable and sits at 546.46 feet above sea level. The lake surface temperature yesterday was around 45 degree (+/- one degree). The main lake if finally starting to show some sign of clearing as well as the creeks and coves. The weather forecast for the rest of the week is to be around normal, 40's to 50's in the days and high 20's to low 30's at night. 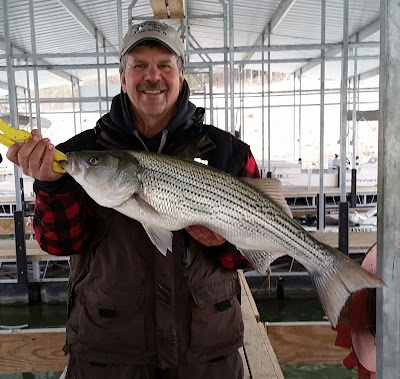 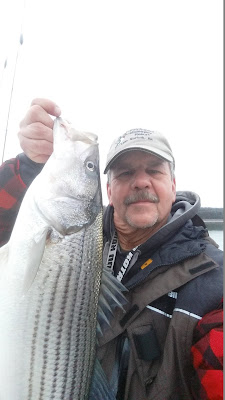