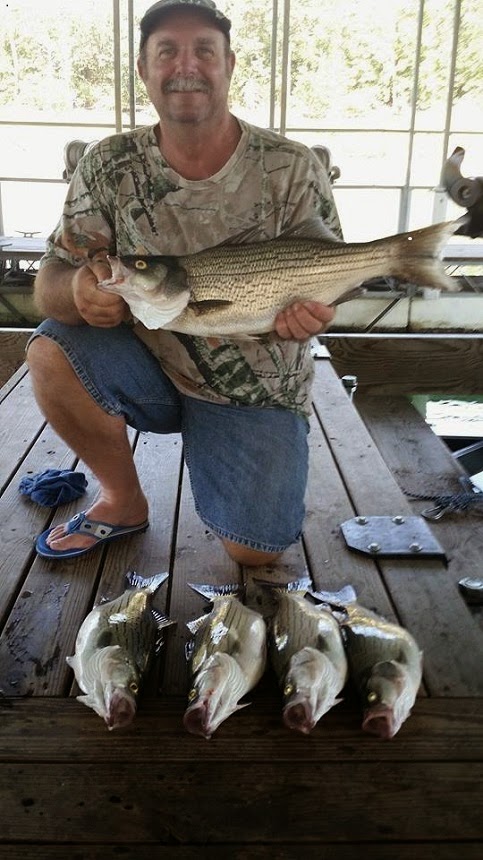 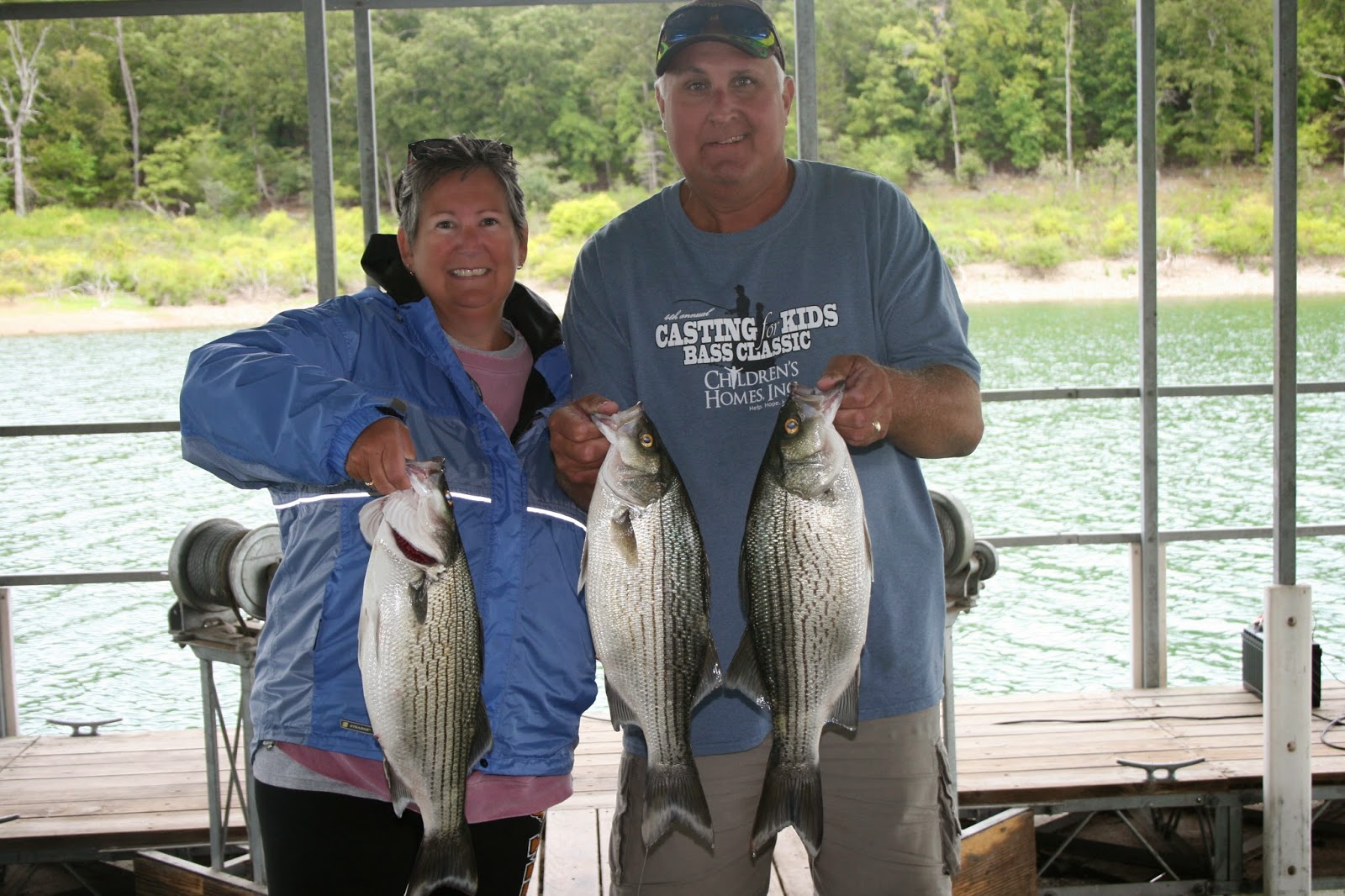 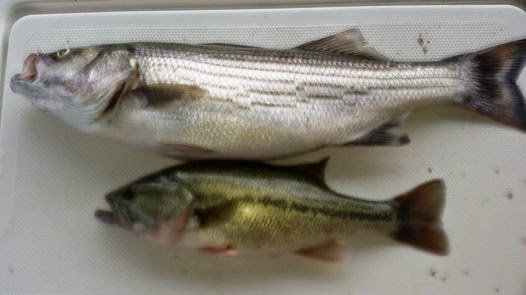 Norfork Lake's striper and hybrid bass bite is still very strong. Today was no exception. I landed 4 stripers in the dark with live gizzard and thread fin shad. I started to fish about 5:45 AM in total darkness. I set out the first pole at 38 ft and was sitting in 42 ft of water. I used a 2 ounce weight with a 5 foot leader, all with 8 pound monofilament line. I started baiting up a second pole and looked over to the first rod and the line was straight out and the reel zinging away. I landed the striper shown in the 3rd photo down. I continued baiting up the rods and finally had 2 out. All of a sudden both rods got buried in the water and the fight was on. To my dismay both of the fish swam together and the lines tangled so I ended losing both of them. After this I only put out one pole and held onto it. This made things much easier. I landed another 3 fish in the same size as below and released them immediately and also missed several good bites. Once the sun rose (approx. 7 AM) the fish decided to leave my area so I had to start looking again. Today I used live bait, but prior to today I had been vertical jigging with a spoon with great success. Jackie and I fished last Thursday (top photo) and had a great time. We landed over 8 fish, mostly hybrids,all on a spoon. We found these fish part way back in a creek at a channel swing in 60 - 70 ft of water. The fish were schooled up and suspended 30 - 40 ft down. On Saturday John and Mary Kay (second photo) used live shad for their fish and they fished the same area that I fished Thursday. Today I found
the fish on a main lake point. The best bite for
stripers and hybrids are within 3 miles north of the dam and also east of the dam. It's a big area, but there's a lot of fish. If this year is anything like prior years the stripers will start to migrate away from the dam area sometime in September, but I have to say, this year has been anything but normal. 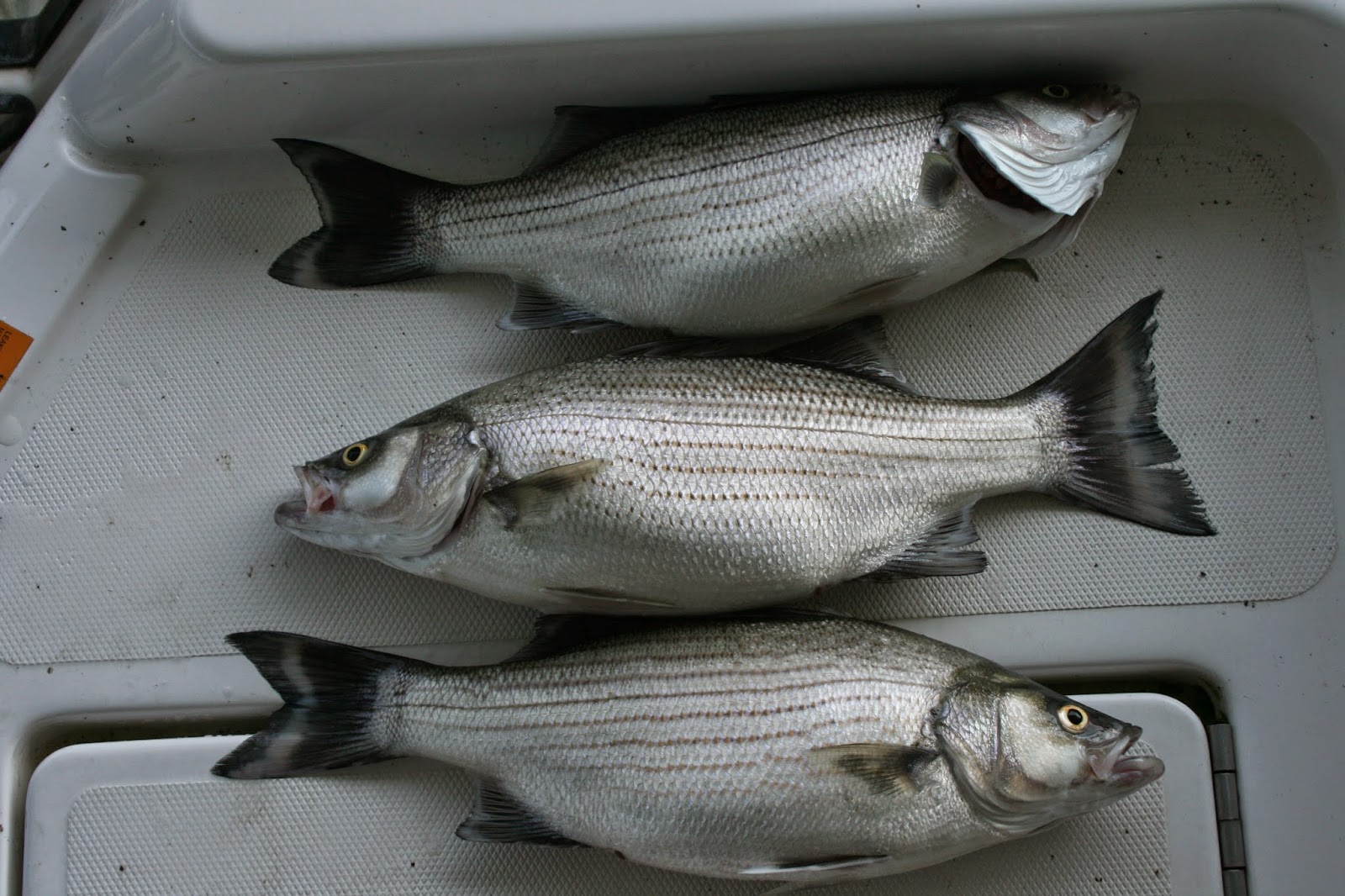 The black bass bite is also very good. Lately there has been some good topwater action at sunrise and sunset for largemouth, spotted and smallmouth bass. Today, however, there was virtually no topwater action, but I did find some
nice schools of bass 30 - 35 ft down in 30 - 60 ft of water. I landed 4 really nice largemouth bass all on a one ounce spoon. What surface action I did see was right on the shoreline. I believe the recent frontal system rolling though our area drove the bass down to the thermocline. 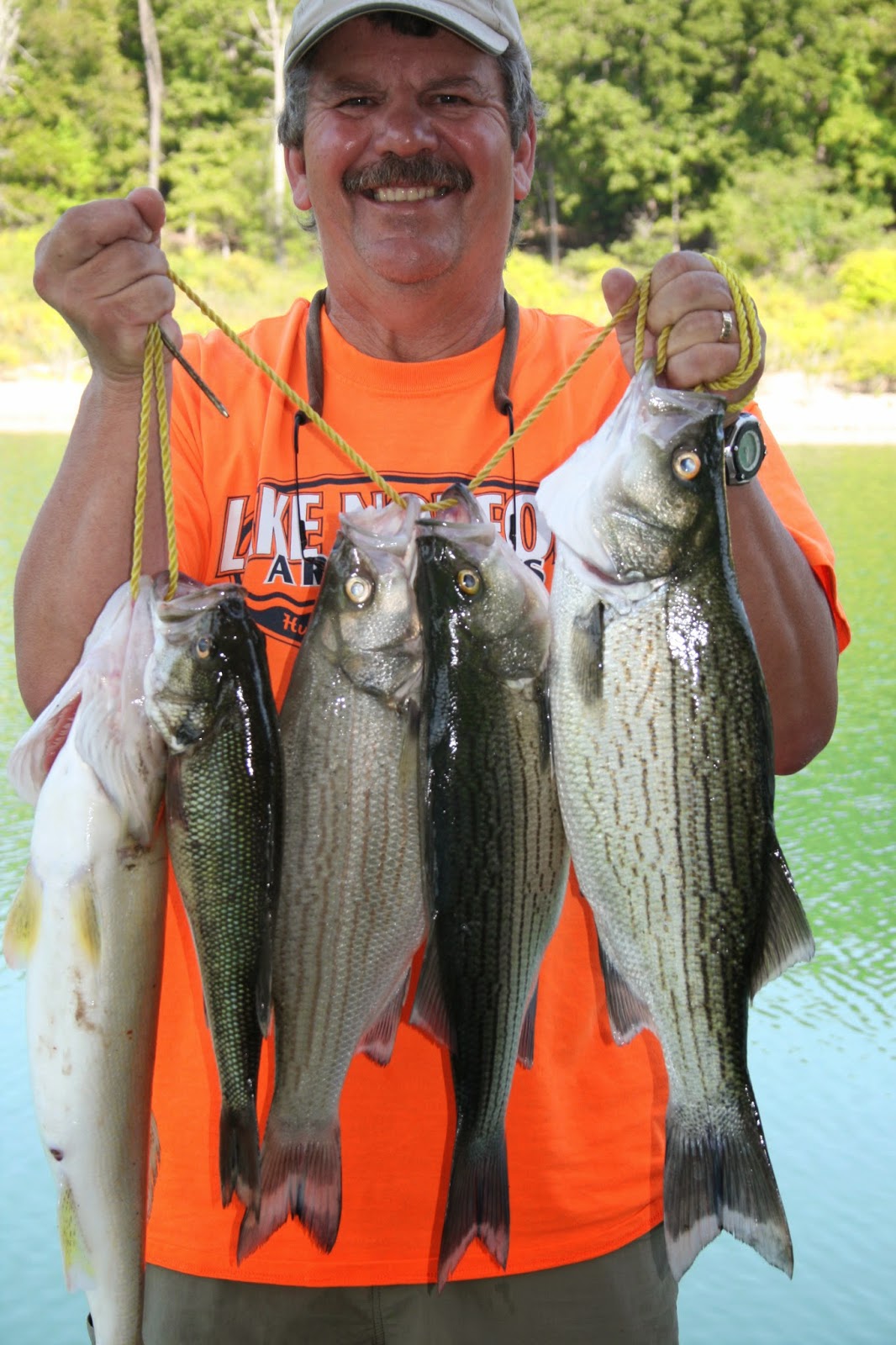 White bass are also schooling, but I have not had much success in finding them consistently. I have found some really big whites when I am striper fishing and some medium size whites up in the Briar Creek area. Look for the whites on the deeper flats in 40 - 60 ft of water. I have spooned up some whites and have also caught some on a Kastmaster.

I haven't targeted crappie or walleye lately so I don't have a lot to report on them. There are still a few crappie sitting under docks, but I am sure most of the crappie and walleye left the brush piles for deeper water when the water warmed up. Watch for the crappie and walleye to move back onto the brush with the upcoming cool front rolling though this week. The last walleye that I caught was in 40 ft of water on the bottom, caught with a spoon vertical jigging.

The surface water temperature this AM was 82.5 degrees. The Norfork Lake level has also dropped a little and is currently sitting at 550.05 ft about sea level. The main lake is clear with the creeks and coves stained.