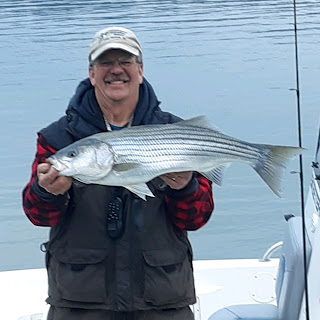 Norfork Lake fishing is in its winter time pattern, but with some twists due to all the drastic weather changes. I guess this is normal, but when you go from 20 degrees to 60 degrees and then the water level changes 5.8 feet in a day, it tends to confuse the fish or at least it confuses me. 😊Fishing would not be any fun if it was the same day in day out. With all the changes, it makes for a lot of searching different types of areas to see what the fish have decided to do. I guess it really is not the fish, but what the weather changes have done to the fish’s food source. Typically, as the water gets cold large schools of shad tend to migrate out to deep water in the main lake river channel. This was what was happening over the last couple of weeks. With the rain last weekend, what is typical has changed. The bait have moved out of the main 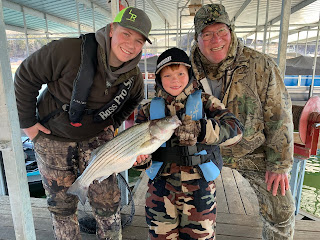 lake deep water. As of this morning, I found lots of bait half way back in creeks, but still in deeper water.

The movement of huge schools of shad effects the locations of striped bass. Over the last couple of weeks, I was finding and catching striped bass between the two main bridges on the lake. The fish were in 80 to 120 feet of water and suspended anywhere from 20 to 50 feet down. Today I couldn’t find any there in the main lake. I finally found that the shad had moved halfway back into the creeks. And when I found the bait, I started marking big arcs scattered though out the  I was also jigging a white 3/4 ounce spoon. About 20 minutes after I had set out the bait a huge school of fish came under the boat. The fish were from surface to the bottom. All of a sudden each of the live bait rods got buried and I hooked into one with my spoon, but it came off immediately 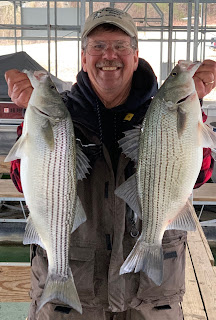 . I landed the first fish (a hybrid), then went to the second rod and the fish swam under the big motor and broke off, the last fish just stole the bait off of the third rod. After all was said and done, I got to land one of the fish and the big school had vanished. It was very hectic while it lasted.  I kept moving around in this 75 – 85 feet of water. I had my spoon down to about 40 feet and I noticed a smaller school of fish at 55 – 60 feet down. I started dropping my spoon and the line went slack and the fight was one. The fish inhaled the spoon on the fall. I ended up landing a nice striped bass. After this I was still marking fish, but they were really scattered out.
bait. I set out 3 rods with live bait at 30, 35 and 40 feet deep.

Bass and crappie are also affected by the weather and water level changes. They may not travel for miles (like striped bass) following the massive schools of shad, but they may change what depth they like to feed at, in the same general area. What the crappie were doing before the 6-foot rise in water level was feeding at the top of the brush on 25 – 35 feet deep brush. They 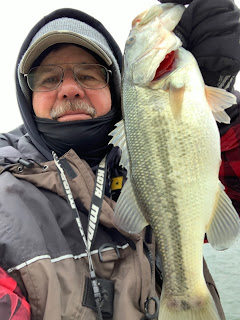 were typically suspended down 12 – 20 feet deep. Small jigs or spoons have both been working well. Bass were also feeding in these same brush piles, but typically down toward the bottom of the brush. Bass were also on the shoreline 8 to 20 feet down and crank baits were working great. A couple of days ago I was back in a creek and found some nice schooling bass in 80 feet of water, suspended 30 feet down. I will be out doing a little crappie and bass fishing over the next week, so hopefully I will be able to figure out what this recent change to the lake has done to these species.

Norfork Lake surface water temperature this morning was 48 - 49 degrees. The lake level has risen a little less than 6 feet since last weekend and currently sits at 559.27. Most creeks and coves are stained, but the brown water from the heavy run-off is falling out. The main-lake is somewhat clear. 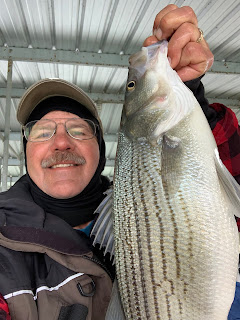 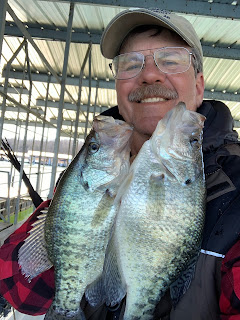